Lead-up:
I jumped straight into a taxi and arrived home to Santry within ten minutes whereafter I was lying in bed within no time. Again though I struggled to sleep and in what felt like no time I was on my feet again getting ready for the final piece of the jigsaw.

Race morning:
I managed to find a spot on Haddington Road to park and after a short walk I found myself bumping into some of the 3:50 and 4hr pacers (Olwyn, Frank & Dave). Lots of congratulations from the folks regarding my two US marathons before settling down. I eventually managed to locate my work colleague Colm who had collected my race number in my absence. Around this time I ran into Felim also who had agreed to run at my pace (approx 3:55 marathon time) as he was coming back from injury himself.

The dreaded weather forecasts of the previous week managed to highlight Met Eireann’s deficiencies yet again and we were all very happy to have such pleasant conditions instead of the gale force we’d been promised. I decided to take off the MCM white cool down jacket before we started but persisted with the gloves and cap for the first few miles at least, til I warmed up. The rough plan was to stay in between the 3:50 and 4:00 pacing groups and maintain that until the end. Ideally I was looking for sub 4hrs but I wasn’t too hung up about times at all as the main goal was just to finish it. 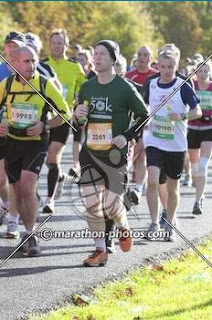 We were very close to the front of the second wave so the congestion wasn’t too bad really, although we did have to stop and walk around the first corner. The organisers set it up so that we started exactly 10 mins after the first wave. This was useful to me because before leaving home I noticed my Garmin must have turned itself on during the flight as it was now dead. In its absence I decided to use the Garmin Fit app on my phone. So, once we crossed the start line I initiated the tracking and then stored it away in my belt wallet as I have done many times before. By the time I crossed the line an extra 11 seconds had elapsed which meant I could simply take 10:11 off every clock I’d see around the course and that would be my time.

The first few miles passed by quickly by chatting away to Felim (who was wearing 2 litres of water in his backpack, yet he never went near his personal supply once during the race, instead preferring to take the course water provided!). As we were discussing plans for next year I mentioned something about the 24hr race in Belfast when a fellow runner pricked up his ears. It turned out to be George from Athenry/Australia who is the husband of RuthAnn Sheehan - the ladies winner in Belfast! And so it was that the three of us kept each other company til the halfway mark having a bit of craic and generally helping time pass.

We maintained position – approx 100m behind the 2:50 pacers - all the while and things were good all round. I could feel my left quad getting a pounding coming down the Upper Glen hill in the Park but once we were back out on the flat it was fine again. Some great crowds lined the route through Chapelizod, Kilmainham and Crumlin which was a great distraction too. Caught up to Kevin/Sideswipe around Crumlin who was pacing the race for his brother. We chatted for a couple of miles before the pair of them kicked on for a sub 3:50.

Passed through 10km at 8:52/mile pace and then through halfway a little quicker at 8:41/mile pace for 1:54:47. Well inside my target but it just felt like the most comfortable speed to run at.

Miles 13.1 - 26.2:
Not long after halfway I could feel that Felim’s pace was increasing further and that my breathing was getting a little heavier so I cut him loose and told him I’d see him in the pub afterwards. Around this time George drifted off into the distance too so I was left to concentrate on getting to the finish line in one piece. To be honest I was happy enough that this was the case because even the casual chatting was beginning to take it out of me!

By the time I reached Terenure College water station I stopped briefly to spray water onto my legs to help soothe tight muscles. While walking I took a gel and some jelly beans as I was quite hungry by now. By the time I was back running I’d only lost about 50m on those around me so not bad at all. Spend a few seconds here to avoid spending a few minutes later!

I managed to keep going solidly for the next few miles but by the time I reached the top of the hill at Miltown it was time for another cooling off for my legs. There was Lucozade Sport here too so I took a mouthful before realising my body didn’t take too kindly to this! My stomach was beginning to feel a bit nauseous now so I had to be careful about what I consumed from here to the finish.

I only lost about a minute here but it was enough to turn around and see if I could spot the 4hr pacers. Thankfully they were still nowhere in sight so I continued on my way, up past Clonskeagh and eventually up Roebuck Hill. I’ve got to say this was a really enjoyable area with the way the organisers had laid on the music and the arch/wall. It was enough to ensure I continued up the incline without fail and then could ease off back down Foster’s avenue. Before long I was on Nutley Lane, down by RTE. I knew there was a water stop around here and I was eager to soothe the legs again. I also downed a couple of jellies but this was tricky by now with my dodgy stomach. It wasn’t long after here that I managed to spot Felim on the side of the course getting some treatment from a physio. Thankfully it wasn’t too serious and he was back running again not long after. 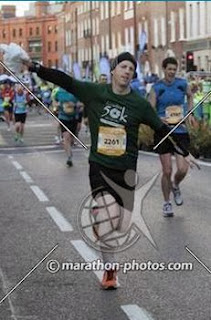 I never really enjoy the run in from St. Vincent’s to the finish and this year was no exception. I plodded along, all the while getting slower – mainly due to the dodgy stomach and poor nutrition. A couple of more short walking breaks to pour more water on my legs before cresting the Everest that is Grand Canal bridge! I was now on the final two miles of the course but as I reached the water station I had to step off the course briefly as I thought I was going to get sick. Thankfully it didn’t happen but when I returned to the course the 4hr gang were in sight, just 50m behind me. I was thinking that as long as I stayed about 20 secs in front of them I should be good for sub 4. However, within a minute I was back off the course again around the 25mile mark. This time there was no holding back and I ended up dry heaving against the wall for about 2 minutes. Eventually a bystander asked if I was ok, and thankfully by that time I was pretty good to go on. After my first few steps I realised I actually felt quite a bit better than a few minutes before. I then realised the 4hr gang had passed and were now out of sight. Running more freely now though I managed to pick up the pace on the final lap of Trinity College and by now I was passing people every 5 seconds. It felt like I was sprinting I was passing out so many and my main concern now was that I’d blow up before the line. Instead however, I ended up passing about 70-80 runners over that last mile and by the time I was running down Nassau Street I was full of life again! With 200m to go I knew sub 4 was gone so decided to showboat a little by doing a poor man’s 'airplane' on the run in and then attempting a very tired ‘Dargan’ jump over the finish line. I didn’t care though, I was finished at last!

Immediately post-run I started to feel cold and stiff so I had to make a choice between getting to the warm pub or returning to the car which was further away and less appealing. Pub won out and I got to meet lots of familiar heads in there with many having run great times and others simply having enjoyed pacing duties. A few disappointing runs but there will be other days to fix them! Unfortunately not all finishers got to enjoy the after run party spirit and one 27 year old – Ricki Savage from the UK - failed to recover after collapsing just after the finish line. Condolences to his family and friends.

I took the remainder of the week off from any running in what was the longest non-running period I can remember for quite a while. No harm though and definitely good in the long term I’m sure.