Friday morning, I got back from work with little time to spare before heading for the airport in the afternoon. The rest of my fellow travellers had flown out on the morning flight and had pre-clearance in Dublin but, due to the timing of my flight, I had to do the immigration clearance the far side in O’Hare airport.

All this meant that I landed at just after 5pm local time and I even managed to get through Immigration before my bags had arrived out onto the carousel – nice one! When I went for the train there was a huge queue waiting to purchase tickets so I decided to get a day pass instead because there was no queue there. Cost about $10 as opposed to $5 as a result but it was more than worth it.

By the time I arrived to the hostel I was starving so caught up with Stephen and Sarah (who had flown from Philly) in a restaurant for some grub. By 9pm I was back at the hostel and hitting the hay. Jet lag works brilliantly like that when you are travelling to do a US marathon!

Saturday, 12th October, 2013 – 3.9km Chicago (22:34 – 5:48/km)
Myself and Johnny went for an easy jog to the Expo to pick up our numbers. It was such lovely weather that we were getting a bit nervous it might be too nice tomorrow morning for fast times! Picked up a few things at the expo so instead of jogging home we reckoned we had walked enough to simply get the free bus home instead.

At midday everybody met up and went on the Chicago Architecture Cruise which was just the job. It allowed us to see lots of the city’s great architecture without having to spend time on our feet. Afterwards we went for food and made our way home for a rest up. Later in the evening we went out for dinner and once more we were all ready for the sack by 9pm!

Sunday, 13th October, 2013 – 43.0km Chicago Marathon (4:40/km)
Race Morning:
Thanks to the jet lag there was no issues waking up early for the race. A few nervous heads about the place worrying that they may not make the start in time due to increased security since Boston. Strangely Stephen wasn't the worst in the regard. Instead Johnny was the most worried and so much so that he left early with Aonghus and Kieran to make his way to the baggage area. Myself Stephen and Sarah weren’t long after them though.

It was still dark as we made the short walk (only a few blocks) to the baggage area. There were fairly stringent security checks on the way in but a few people with wheelchairs managed to avoid most of the searches so it was a bit half hearted to be honest. More a show of security than anything.

After searching around in the dark we eventually came across the boyos who had managed to add two lads from Castleblayney to their numbers. We sat on the ground in nervous anticipation for the next hour. We got to see the sun rising though and set against the Chicago skyline it was pretty cool! Around this time I saw an Irish shirt passing by a few yards from us. It later turned out to be Peter who was the final member of our Boards.ie team and we’d get to meet him properly later.

Starting line:
Eventually it was time to make our way to the start. I was in Corral B but the rest of the lads were in Corral A so it was time to go solo. I managed to get into the corral about halfway to the front. I was positioned between the 3:20 and 3:25 pacers and with my race strategy being to start easy I felt this was ideal. While awaiting the start we were treated to an invisible flyover by a jet and a dodgy PA system messing up the National anthem. Hopefully there would be no more disappointment today though! Just before race start I ditched my old jumper which I’d been using to keep me warm and almost spot-on time we were away.

Miles 0 - 6:
So, my plan was to take it nice and easy as far as 15km and then step it up a little before maintaining a solid second half to the race. My target pace was 4:44 for the first 15km but immediately there were issues with this. The 300m of a tunnel and the high buildings of downtown started messing up my GPS data so I wasn’t sure what pace I was travelling at. Thankfully I had a pace band on me so I was able to track my progress off the mile markers. I gave up running by pace in the early stages and instead kept an eye on effort through my HR. Thankfully it was well under control and as the early miles passed by I was well within my limits as I started to hit my goal pace through the mile markers. I even heard the earliest “You’re almost there!” shoutout ever after just 4.5 miles!

Mile 6 - 13.1:
Things were going well. We were passing through nice areas of the city now including Lincoln Park, Old City and River North. Several Irish flags on the course but anytime I gave them a shoutout they seemed too engrossed in trying to locate their own runners. After about 7 miles we turned back Southwards and around this point I ended up pushing on a little and upping the pace slightly. The crowds were great around here and a couple of the streets here reminded me of the streets of Rathgar in DCM - lots of leaves on the ground with red brick period buildings lining the streets. 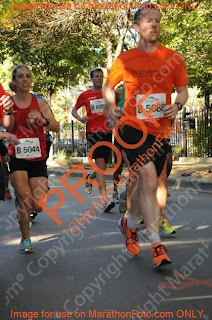 By about 11 miles we were back in the heart of the city and again the crowd support increased. These miles felt almost effortless and I passed the 3:20 pacers somewhere around here. As I approached them I briefly considered slowing down and running with them but realised I was moving freely and also I simply preferred to run my own race anyways, so I just went right by them over the course of 200m.

We eventually headed out West through Greektown and towards the United Centre, home of the Chicago Bulls. I didn’t quite get to see the building itself unfortunately but we’d be back there later in the week anyways! The Halfway mark appeared just before this point and for the first time in the race I was beginning to feel the strain. My first half was 1:38:05 so I had been looking at getting home in sub 3:15 if I could keep the pace constant from here til the end of the race. Overall I was really happy with my pacing so far.
15km – 22:57 (4:35/km)
20km – 23:09 (4:37/km)
HM – 1:38:05 (Av Pace – 4:38/km)

Miles 13.1 - 20:
The landscape was not quite as attractive now as we passed by close to a Freeway and also went through a few more industrial type areas. The crowd support was waning a little around here but to be honest I was happy enough to give my head a little peace! We passed through Pilsen around here and this was home to many different ethnic groups such as Italians, Mexicans and other Latin Americans. Each area’s main street had it’s own type of distinct carnival atmosphere. 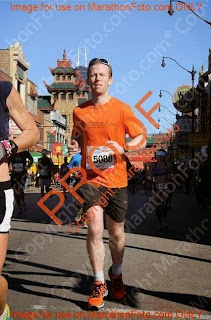 I was now into the final quarter of the race and things were becoming much more difficult now. I began thinking back to my training and the fact that I’d only managed 3 x 20 mile runs but nothing longer. I was paying for that now.

We turned the corner into Chinatown but to be honest I was working so hard now that I barely noticed what neighbourhood we were in! There was a little bit of a quiet spot after Chinatown with another section similar to the bit after halfway. Except this time I could really have used the support.

Apparently the home of the Chicago White Sox was just South of us now but it may as well have been in another State for all I cared as my focus was now firmly trained on the City centre to the North. 3 miles to go and I was doing my utmost to simply keep going. I could sense the pace dropping all the time. The final 2 miles are pretty straight and I was looking over my shoulder a couple of times before the inevitable happened – Bloody 3:20 pacers passed me out again around 2km before the finish. I briefly tried to stick with them but just couldn’t keep the pace. 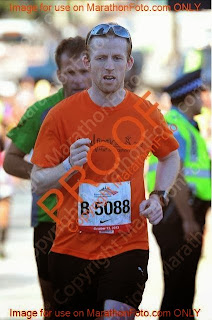 I tried keeping the pacers in view for the remainder but with about 600m to go there is a 90degree right followed by 300m of a climb over a bridge and then a 90degree left before the final 300m to the finish. We joked beforehand about Olwyn’s tip-off regarding the little bridge. Nobody gave it too much attention but knew it may be different on the day. And so it was! Felt like I was running in treacle for the duration of the incline but eventually I beat it and thankfully there was a slight downhill to the finish and at last it was all over!

The usual death march took place immediately after the finish line but soon the light at the end of the tunnel appeared in the form of a free Goose Island 312 beer! I got hold of several other ‘goodies’ before returning to the meeting point to discover that it was a day of PBs with Aonghus, Stephen, Johnny and Kieran all recording PBs. Time for another beer to celebrate that (We would later discover that our team entry – Pi$$ Artists – would place third in our competition. So, I can now officially say I was 3rd in the 2013 Chicago Marathon!!). 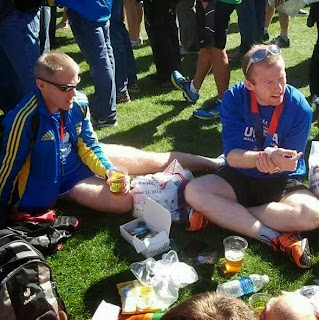 We later made our way to Kitty O'Shea’s bar in the Hilton (Official Chicago Marathon event Hotel) to meet a few others including Peter who also claimed a PB. Stephen T also managed to make it around in comfortably sub 4hrs even though he was unable to do much training at all due to injury, so everyone was delighted with how the day went. Unfortunately Sarah didn’t manage to make the start line herself due to her injury problems so hopefully she didn’t mind us all going on about things too much!

We had a couple of beers in Kitty’s before returning the short distance home for a shower and then out for food and more celebrations for the evening. Well deserved all round methinks!